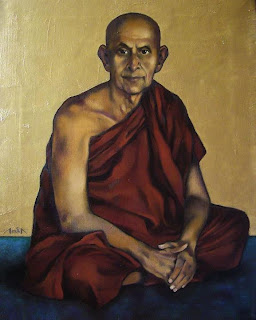 Born on December 5th 1941, Pemasiri Thera began meditating shortly after he could walk! As a teenager he travelled almost daily from his home in the village of Kidagammulla of the Gampaha district to the Vipasannā Meditation Centre in Kanduboda, where he learned meditation from highly qualified and respected masters including Sumatipāla Nā Himi (Abbot and founder of Kanduboda Vipasannā Meditation Centre ) as well as the Burmese Masters Webu Sayadaw and U Pandita.

He is currently the abbot at the Sumathipāla Nā Himi Senasun Arana, a dwelling place that emphasizes the philosophical and Dhamma approach to the teaching of the Buddha as opposed to the religious approach.


Pemasiri Thera’s students, not only from Sri Lanka but also from around the world, and from various religious backgrounds, call him their guide in life and not just a meditation teacher.


Going to the core of their unique experiences, he leads them to the point of seeing the true nature of existence.


Pemasiri Thera is the author of “Walking the Tightrope”